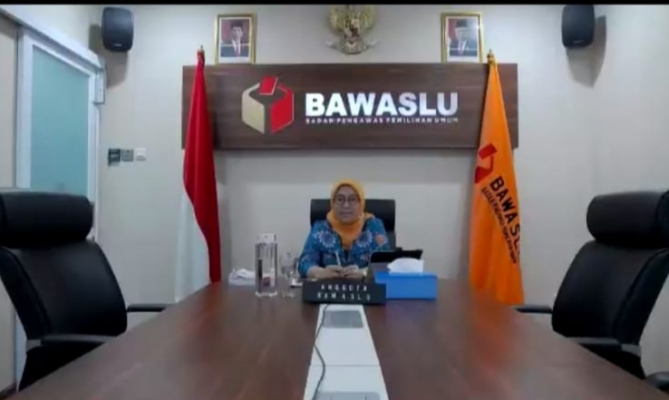 Jakarta, Election Supervisory Agency - Bawaslu member Ratna Dewi Pettalolo revealed there are six vulnerable points in the stage of nominating the Simultaneous Election of 2020. Registration of regional head candidates to the KPU will be held on 4-6 September 2020.

Dewi mentioned the first critical point, namely PPS or research officials did not do factual verification (verfak) of the support of individual candidate pairs (bapaslon). The action is considered to be detrimental to those who have prepared documents properly. Conversely, it can be advantageous because the Bapaslon which does not have complete documents can pass because there is no verfak.

"So the supervisors in the field must ensure that the PPS has carried out factual verification by the procedures," Dewi said in the Nomination Stage Prone Point webinar: Prevention, Monitoring, and Enforcement Strategies, Tuesday (07/07/2020).

The second critical point, continued Dewi, registration of paslon at the last second. This was allegedly able to complicate the provincial or regency/city KPU because they did not have enough time to check the completeness of the paslon documents. The third vulnerable point is the conflict in the management of political parties (political parties) which is the cause of the emergence of political party recommendations to more than one pair of candidates.

"We hope this does not happen. There is no double management. If it happens we will anticipate that the recommendation of political parties is not more than one paslon," said Dewi.

The Chairperson of the Central Sulawesi Province Bawaslu for the 2012-2017 period added a fourth vulnerable point, namely the provision of rewards in the nomination or political dowry process. Bapaslon often has to submit rewards to political parties to get recommendations. Although the term dowry is a good connotation in marriage, the opposite is less good when it is linked to politics.

The fifth critical point, said Dewi, is the existence of false documents or information on the terms of nomination and candidates. Documents that are often falsified in the nomination is a diploma. Other documents, according to Dewi, could also be a potential for counterfeiting.

"Bawaslu has handled many similar cases in elections or local elections. This is a big challenge for us. Not only the election organizers. But the public can also report to us if they know the practice of cheating," he said.

Finally, continued Dewi, false support of individual bapaslon. Practices carried out by the Bapaslon or winning team by profiteering one's identity to serve as supporters. Dewi said that Bawaslu was processing the fraud that occurred in Riau Islands, Rejang Lebong, Bengkulu Province, and Supiori Regency, Papua Province. Currently, it has entered the investigation stage.

"Starting from the findings and reports from the public whose name is painted in the support of individual bapaslon. This proves that the community has been carrying out oversight work and handling violations has been carried out by the ranks of Bawaslu," he said.