Proven to Use Social Assistance for Pilkada, Mayor of Sungai was Sentenced to Guilt 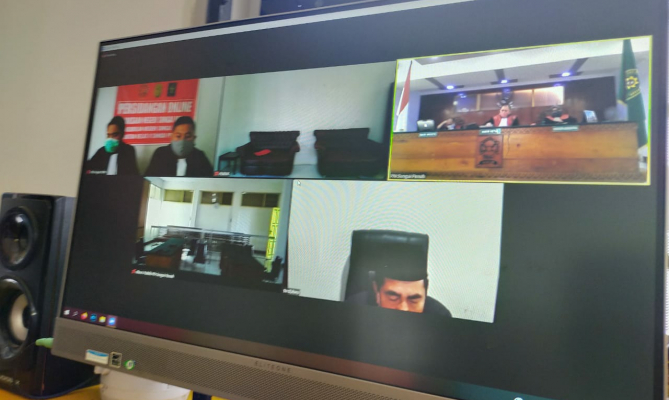 Jambi, Election Supervisory Body - Sungaipenuh District Court (PN) stated that the defendant Sungai Penuh mayor AJB was legally proven to have committed an election crime. The case in the video case of the Mayor of Sungaipenuh during the distribution of social assistance (Bansos) inviting residents to vote for a certain candidate is sentenced to a fine of Rp. 4,000,000 (four million rupiah) provided that if they are not paid they will be replaced with a 2 (two) month imprisonment.

AJB was found guilty of committing a criminal act of using activities that benefited or harmed one of the pairs of candidates both in his own region and in another region within 6 (six) months prior to the date the pair of candidates was determined up to the appointment of the elected candidate pair. AJB's action violates the provisions of Article 71 paragraph (3) in conjunction with Article 188 of Law Number 10 Year 2016.

The video of the Mayor of AJB, which lasted 45 seconds in the Hamparan Rawang sub-district some time ago, was previously reviewed in a study of alleged Bawaslu violations at Sungaipenuh City with Number: 06 / TM / PG / Kota / 05.02 / IX / 2020.

From the conclusion of the study, the actions of the AJB perpetrator who was then in official uniform inviting support to one of the prospective candidates and specifically designating a billboard was an act against the law as stipulated in Article 71 paragraph (3) in conjunction with Article 188 of Law Number 10 of 2016. And subsequently it was decided in the plenary meeting of Bawaslu for Sungai Penuh City to be forwarded to the Kerinci Resort Police Investigator.

Jambi Province Bawaslu member Wein Arifin confirmed this. He said based on information from the Gakkumdu Sungaipenuh Center, the Sungai Penuh District Court has handed down and sentenced a case of alleged violation of the 2020 Election criminal.

In a virtual trial held by the Sungai Penuh District Court, the defendant AJB was found guilty of committing an election violation and was sentenced to a fine of 4 million rupiah a subsidiary of 2 months.
"After going through the process at the Gakkumdu Center, and being delegated to the Prosecutor until the trial was held, Tuesday afternoon it was decided by the Sungai Penuh District Court," said the Coordinator of the Jambi Province Gakkumdu Center, Tuesday night (27/10/2020).