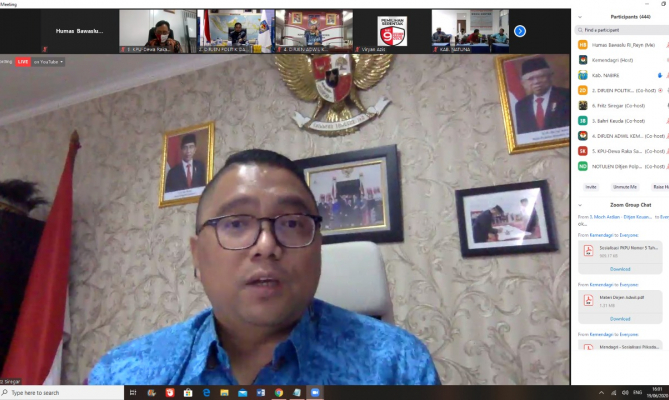 Bawaslu member Fritz Edward Siregar conveyed the crucial issue of the stages of the elections in a meeting in the network (online) with the Ministry of Home Affairs in Jakarta, Friday (06/19/2020). Photo: Reyn Gloria / Public Relations of Bawaslu RI

Jakarta, Election Supervisory Body - In dealing with the simultaneous elections of 2020, Bawaslu member Fritz Edward Siregar sees that some crucial issues must be faced. According to him, this needs to be a joint concern of both the election organizers, the government, and the community.

First Fritz stated in the candidate verification stage. He explained, there were 154 pairs of candidates (paslon) individuals with details of two of them for the Governor Election and 152 other individual candidates at the regency/city level. In carrying out the verification, he expects the officers not to have physical contact and keep their distance.

"We from Bawaslu see online verification that there is a potential for a dispute if the election supervisors are not involved from the beginning. Then access must be granted," he said at a meeting in the network (online) with the Ministry of Home Affairs in Jakarta, Friday (19/06/2020).

Then at the stage of updating voter data, continued Fritz, detailed data collection must be done even though it must be verified online. Furthermore, Fritz added, there were challenges during the paslon registration stage, according to him the KPU had to be strict in limiting the number of assistants.

"Everything will indeed be completely sterilized, the KPU must be firm to ensure that candidates who come do not bring supporters because we minimize the process of crowding people," explained the winner of the law doctorate from the University of New South Wales Australia.

In terms of the campaign, Fritz also saw the ease of campaigning online. For couples who have unlimited wealth, this is an advantage because it can provide space for people even though its effectiveness is believed to be unsatisfactory. But not with paslon who have enough capital, the campaign will be very limited.

Fritz also saw that the buildup of the most vulnerable people was at the polling stage. According to him, the organizer and all relevant stakeholders need to prepare equipment in full as a weapon to face the co-19 pandemic.

"We must see that the KPU and Bawaslu are very concerned about maintaining the process at the voting stage. The availability of logistics, health facilities, the cooperation of medical personnel in each region is very important," he explained.

Stages after voting according to Fritz also can not be ignored. The Bawaslu process in carrying out the enforcement function of violations must make adjustments by the COVID-19 protocol without reducing the essence of the implementation and authority of election supervision. Likewise, with adjudication and dispute trials, the course of the hearing needs to be adjusted to the health protocol.

Even so, Fritz said that as preparations were made, there was a joint task that needed to be carried out hand in hand to ensure that voters had confidence in the election organizers and were willing to attend the polling stations. He felt that this was a joint task to socialize the government transition process to continue the development of the national bureaucracy. 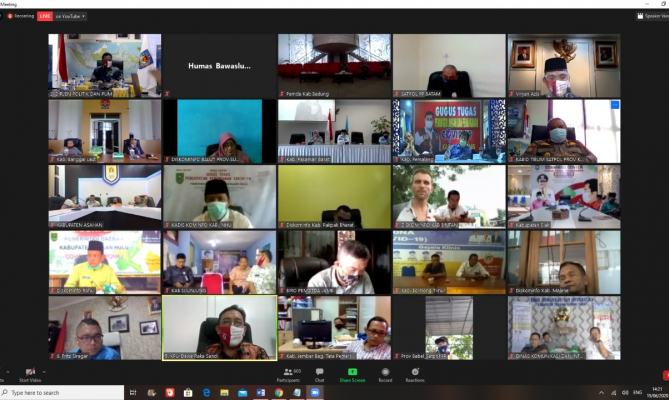