Nasrullah: If Elections Committee is Not Ready, Election Will Lame 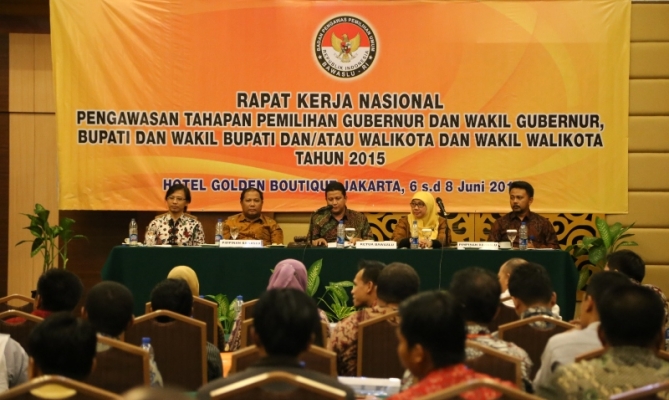 In some region it is varied, there are several District/City that was already completely ready. That is the budget ready, NPHD (Regional Grant Agreement Letter, Ed.) has been signed and fulfilled. In addition, there are areas which the budget is there, but not enough and some are not available at all. "Because of that, the Meeting tonight to see how far the preparation overall in 269 points in 32 province predetermined" said Leader of Election Supervisory Board RI Nasrullah at the opening of the National Working Meeting Supervision Stages election of Governor and Deputy Governor, Regent and Deputy Regent, Mayor and Deputy Mayor at the Golden Boutique Hotel in Jakarta, Saturday (6/6).

Nasrullah added, this is not only a problem about limited supervisor budget and then make the election supervisors to be 'sluggish'. Elections supervisors get ready to carry out supervision, but it cannot be denied us (Election Supervisory) also recruit people. Not easy to recruit supervisors, especially at the level of TPS (polling stations, Ed.) especially PPL level.

"Supervision of the elections already and can work, if it also has an obligation considered by the (government)," he said. “For example Sibolga district, until now the budget is only 300 million. While, cost of fees District Supervisory Committee to the polling station level by nearly 900 million. If so, how do the regulatory process ?”, said Nasrullah

"Then, the supervisor must be firm, cannot be forced to vote there (Sibolga)", said these former of KPU Yogyakarta commissioner.

Election organizers, continued Nasrullah, KPU and Election Supervisory Board is one womb. Therefore, should be seen from two sides. But how could be forced to walk if the budget is not there. KPU and Election Supervisory Board must be prepared. If the election supervising is not ready because it is not supported by the government, the election would be lame.

"Who will resolve election disputes? Who will resolve the problem of law enforcement? Police and Prosecutors can not do, because there is one element that must be tied in it that the election supervising", he said.

"Let the spirit and fight, sure we still oversee the organization of this regional elections. Close the ranks and still maintain solidarity. Make sure you talk firmly and in accordance with the data. Do not want to be underestimated by anyone it", he said.