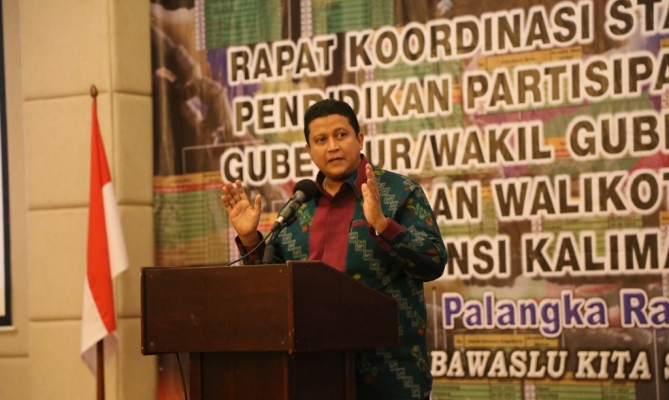 "Elections should be able to make people happy, not the stress. We would be born a leader acceptable to the majority of society," said Muhammad while opening the Coordination Meeting of Stakeholders in the Context of Education for Participatory Monitoring Election of Governor and Deputy Governor, Regent and Deputy Regent and Mayor and Deputy Mayor, in Palangkaraya, Central Kalimantan, on Monday (8/6).

Professor of Political Science, University of Hasanuddin was revealed, all stakeholders have an obligation to create exciting election. Elections, he added, should not serve as the event that triggered the emotions and divisions among certain groups. Election also is not to reinforce the dualism in society.

Elections, Muhammad continued, must be understood as a process. Not as a destination. The elections were a harmonization process to build community after election results set.

However, he said that a successful election will not happen if good faith only comes from Election Supervisory Board or KPU. Muhammad said, all stakeholders ranging from regional government, political parties, police, NGO, religious leaders and community leaders have the same thoughts and determination.

Concurrent regional elections in 2015 according to Muhammad is very special. Not only from simultaneously, but also of the potential for conflict that will result from the simultaneous election rules.

"Political observers are already expressing the region election is greater than the potential conflict national elections. Because of the involvement of all political elements in the election, and the sudden death because of the elections only one round," said Muhammad.

Stakeholders Coordination Meeting is an event that held by Public Relations and Inter-Agency Relations Law Bureau, Public Relations and Internal Control Election Supervisory Board RI. Besides attended Muhammad, that two-day event was attended by Leader of Election Supervisory Board RI Nasrullah and Nelson Simajuntak. Also present were representatives of the provincial government of Central Kalimantan, Rector of the Institute of Public Administration Suhajar Diantoro, representatives of the Indonesian National Police, the Attorney General, Forum for Religious Harmony Central Kalimantan, and Members of the House of Representatives Commission II Willy M Yoseph. Also present were representatives of the public, political parties, students, the media and NGOs in Palangkaraya.