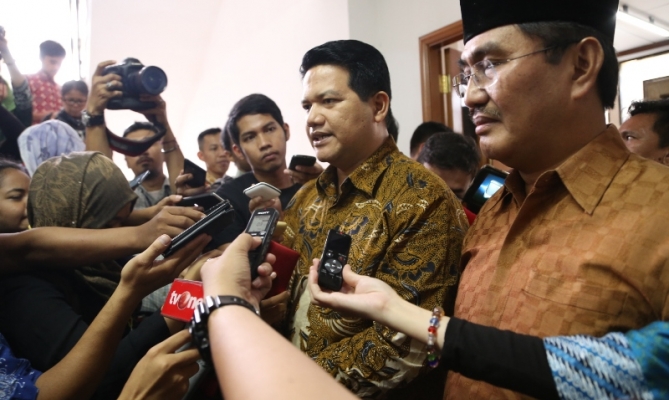 Therefore, these three agencies hold regular meetings to discuss preparations ahead of the Elections next December 9, 2015 simultaneously in KPU office, Friday (5/6).

In that meeting, Leader of Election Supervisory Board RI Nelson Simanjuntak explained the budget for inspectors is still not fully met. There are still 103 area have signed Regional Grant Agreement Letter (NPHD) while the current stage of the elections has already started.

"We are still plagued with financial administration which does not uniformly downwards. Some regions have not been able to create an bank account because the rules of the State Treasury Office (KPPN) that must wait for the instruction letter from the Ministry of Finance," explained Nelson.

It is also supported by the Commission. Chairman of KPU Husni Kamil Manik said it also hopes the central government and local governments immediately to facilitate 60% of districts/cities that have not completed their NPHD with the Supervisory Committee so that no

"Hopefully it can be resolved in order to run an effective election monitoring. We must be optimistic that organization of elections in 2015, Insya Allah, the better," he said.

Meanwhile, the Chairman Prof. DKPP Asshiddiqie insisting it reminded all staff of the KPU and Election Supervisory Board to learn from the Legislative Election (Pileg) and presidential election 2014, and elections in each of the previous area.

“We hope all of Election Organizer to be honest and fair and maintain the principles of ethics code  and sense of ethics that have been written, is in the heart of each. We all hope, this election is better than period ago and produces a good region leader," he said.

Related to political party that is currently in conflict, Jimly hopes internal party can to solve soon and do not late to submit candidates.