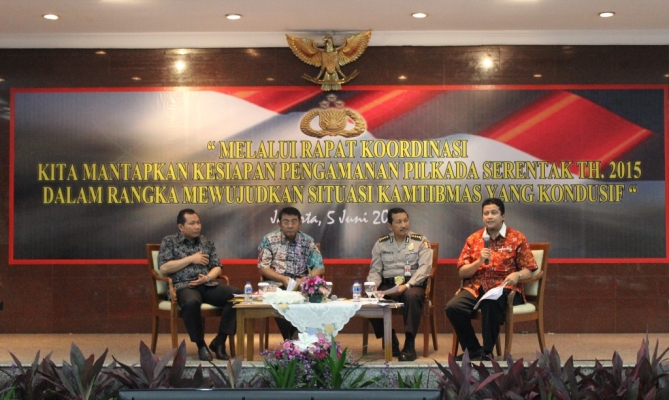 Chairman of Election Supervisory Board Muhammad said, according to the Acts No.8 of 2015 concerning the Elections, reported the suspect violation no later than seven days after the discovery of violations. Elections supervisor shall conduct a study a maximum of three days. Then followed by a plenary session, maximum of two days.

"Within a maximum of 1x24 hours of reports of alleged criminal offenses had to be forwarded to the Sentra Gakkumdu. The time limit on police handling a maximum of 14 days," said Muhammad as a guest speaker in the Police Operational Coordination Meeting 2015, at the Indonesian Police Headquarters, Jakarta, Friday (5/6).

With handling grooves of the violations are clear, Muhammad expect, handling violations through Sentra Gakkumdu could run better. So that law enforcement at the simultaneous regional elections scheduled to take place on December 9, 2015 can be optimized.

On the same occasion, the Main Junior Attorney of Attorney General, Irdam said, Attorney always ready to support the implementation of the simultaneous election of 2015. He expects synergy in Sentra Gakkumdu woke better than previously  legislative elections and presidential election, 2014.

"Synergy in Sentra Gakkumdu hopefully better. In accordance with the memorandum of understanding that has been built between Election Supervisory Board, the Police and the Attorney General," he said.