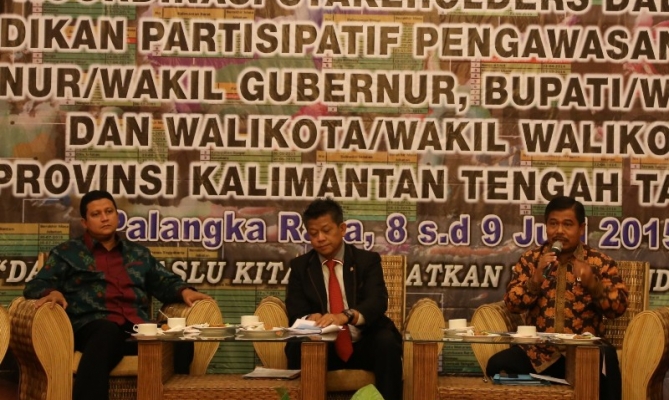 Palangkaraya, Election Supervisory Board - Rector of the Institute of Public Administration (IPDN), Suhajar Diantoro said the government made various efforts to expedite the implementation of the election of governors, regents and mayors in 2015, including support in terms of public order and safety guarding. However, he asserts that oversee security order and also prevention of conflicts in the election is not just a matter of law enforcement officers.

"Community leaders, community forums have been invited here also to believe that conflict prevention is our responsibility," said Suhajar when discussion entitled "Elections are Dignified, Quality, and Integrity" in the Coordination Meeting of Stakeholders in the Context of Education for Participatory Monitoring Election of Governor and Deputy Governor, Regent and Deputy Regent and the Mayor and Deputy Mayor, in Palangkaraya, Central Kalimantan, on Monday (8/6).

Suhajar said there should be mapping the potential for disruption of social order in the election. According to all stages of the elections, there are several points that could lead to disruption. Registration of candidates who will open some future time, is regarded as one of the stages that need attention.

"There are multiple management bearers of political parties, as well as support for the candidate ID card could be a problem of potential interference. When the logistics are distributed sometimes too late, given the potential for interference, the things that should be avoided," he said. He added that another phase potentially conflict is a campaign, the quiet period, the voting day, and when the determination result. "As during the quiet period until the voting day, there are potential money politics, bullying opponents candidate, invites non-voters, intimidation, to destruction," said Suhajar.

Efforts to maintain security and public order in the election, as he said, cannot just rely on the security forces. All elements of society must participate prevent conflict. The community need continue to keep the situation conducive, peaceful solution if there is a problem, and establishing an early warning system.

Meanwhile, members of Commission II of the House of Representatives, Willy M Yoseph said Commission II encourages the KPU and Election Supervisory Board in conducting the election based on the 11 principles in the election, which is independent, honest, fair, rule of law, order, public interest, transparency, proportionality, professionalism, accountability, efficiency, and effectiveness. Commission II thinks also hope the simultaneous elections in 2015 runs with orderly, safe and controlled. Thus there is no friction and anarchic actions that could disrupt the stability in the region.

"Simultaneous Election for the first held in 2015 so an early indicator for the success of the elections. The Commission II hoped that all stakeholders work together, so that subsequent waves arrive at the elections highway in 2027 later. The indicators we have successfully used for the wave first," he concluded ,