Bawaslu calls for abolition of ‘noken’ voting system in Papua 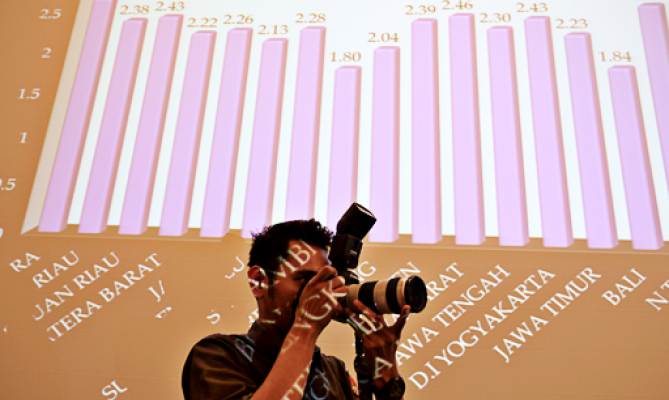 Center stage: A photojournalist takes his place in front of a screen showing an election-related violence index compiled by the Election Supervisory Agency (Bawaslu) ahead of the simultaneous local elections on Dec. 9, 2015. (thejakartapost.com/DON)

The Election Supervisory Agency (Bawaslu) has called on the Indonesian government not to use the noken voting system again for regional elections in Papua and West Papua, saying that it violates democratic principles.

Noken, a voting system named after a traditional Papuan bag, has been implemented as a decision-making procedure in a particular community led by a tribal chief. However, It is not the tribal chief who chooses a leader; consensus has to be reached before members of the community come to a decision.

“It [noken] is okay as a cultural practice, but it is not right. It is not in accordance with the principles of elections,” Bawaslu chairman Muhammad said in a discussion at the National Commission on Human Rights (Komnas HAM) in Central Jakarta on Tuesday.

“We hope that our Papuan friends, who have had an opportunity to pursue their study at schools [outside Papua such as those] in Yogyakarta, can become election organizers to fix the problems there,” he went on.

Papua and West Papua used the noken system when Indonesia held simultaneous regional elections for the first time in 269 regions on Dec.9, 2015. In Yahukimo regency in Papua, 49 out of 51 districts used the system at that time.

During the regional elections, Komnas HAM monitored the voting processes in Papua and said that it found many human rights violations, claiming that the noken system was often manipulated so that regional leaders emerged as winners.

“It didn’t purely represent Papuan local wisdom because a lot of manipulation occurred in the system,” said Komnas HAM commissioner Dianto Bachriadi in the discussion.

Instead of having transparent and accountable elections, Papua has in fact become a province with the higher number of regional head election dispute claims lodged at the Constitutional Court.

“The highest number of requests for the handling of disputes on the results of gubernatorial, regental and mayoral elections on Dec. 9, 2015, were from Papua, which reached 16,” Court spokesperson Budi Ahmad Johari said on Jan. 5, as quoted by Antara.

Basically, the General Elections Commission (KPU) has agreed to remove the noken system in the future as it has brought a lot of problems in the organizing of elections.

KPU Chairman Husni Kamil Manik said in the discussion that several methods of manipulation were common in the noken system, including the use of the name of voters who were not actually in the area or people who had already died.

“We have to discuss this seriously. Don’t allow ‘dead people’ to vote,” he said.